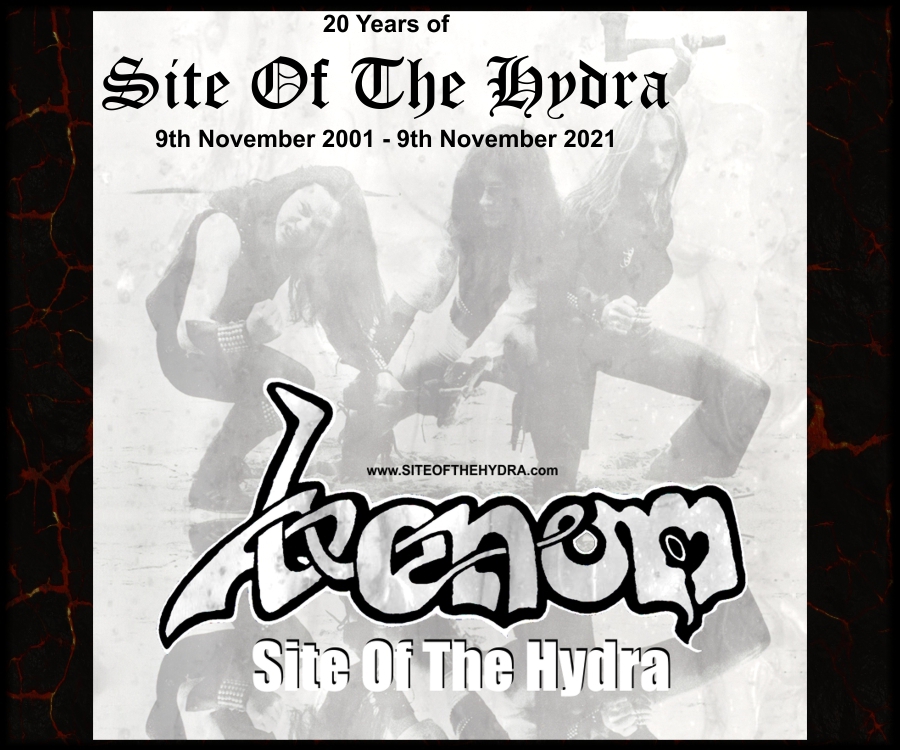 On this very day 20 years ago, the PUBLISH button on our website builder was hit and SITE OF THE HYDRA was launched! And for the very first time this humble VENOM Fansite was made public. Apart from thinking how fucking quick 20 years pass, that evening is still fresh in the mind, and is an evening we still look back on with much fondness.

To celebrate, we got a few real old school T-Shirts printed to commemorate the 20 years, but to also hopefully look forward to the next 20, we will also run a few competitions throughout the year to celebrate with Ye Legions.

Due to changes in technology, the PHOTOS section of the website will have to be completely revamped (the photos were published using Flash, and Flash is no longer compatible on most browsers). So there is plenty for us to do – not only to restore the original photos that we were using, but I guess it is time that we added some never-before-seen ones too!

For now, all that remains to be said is a huge fucking HELL YEAH and THANK YOU to Ye Legions who have supported Site Of The Hydra for these last 20 years! Re-fucking-spect to you all!

As this is being typed, it is November 2016. It is hard to believe that over 15 years have now passed since we launched Site Of The Hydra. This humble website is now the longest running VENOM Fansite on the www. So let's have a look back to when it all started...

We only bought a computer in the first place 'cos of our desire to have a fansite dedicated to our fav band. And in the first week of November 2001 we took our first steps into the unknown. I clearly remember the nervous excitement of the days prior to going online, it was a scary, though fun, experience! The feel of VENOM's mighty RESURRECTION album was still fresh in the veins of The Legions those days, and we were determined to show our colours online as well as on our shirts and jackets! So on the evening of the 9th November 2001 the Publish button was hit and Hydra took flight...

The site, even though it was done by web-rookies like us, was an incredible success, and through it we have got to know a Hell of a lot of real cool people from around the world, indeed we have met many of these cool folk at various concerts, etc, since. We continued to improve the site over time, but starting in 2006 and going through 2007, a certain individual decided to Steal The Wings Of A Hydra, resulting in our beloved fansite being destroyed during July 2007. It was (and is, and forever will be) a very painful experience, and resulted in Mrs Hydra stepping down from webmaster duties (cos she was so disappointed and disgusted by what had happened), and meaning the year of 2007 was the most horrible time of our Metal existance...

However, despite the heartbreaking and devastating loss of the true SOTH, the decision was made to continue with the website. While there will always be restrictions on certain aspects of the site, Hydra has recovered, and will continue to improve and evolve for many years to come. The Venom-Fire still burns as strong as ever in us, and our devotion and worship of the real and true VENOM will be with us forever!! We have even managed to realise a Venomous-lifetimes dream, in the form of creating our own little VENOM Fanclub, Deepest Hell. What an honour it is for us, being in such a Die-Hard group with the True Legions - Hell Yeah!!!!!

There are lots of ideas and plans that will manifest themselves onto Site Of The Hydra in the coming years, so prepare for lots more Hydra-Hell!!!

In the 15 years of Site Of the Hydra, there has been lots of changes and trends. When we started, Guestbooks were used for communication between us Legions. Then Forums replaced Guestbooks.... and now Forums are being overtaken by the social-networking sites. But whatever mediums we have been using over the years, it has always been a total pleasure to be In League With All Ye Mighty LEGIONS!! It has been our honour to share our VENOM worship with you all this last 15 years, and here's hoping to many more 10's of years!!